Degradation of the Brazilian Rain Forest Pie Chart and Information 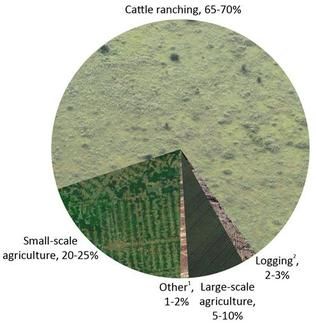 All of our warehouses use responsible mills that meet both U.S. and Brazilian requirements such as The Lacey Act and Ibama, Brazil's Environmental Protection Agency.

Cattle ranching is the main cause of the degradation of the Brazilian Rain Forest, not milling. Cattle ranching cuts down the forest for grazing pastures and does not replenish, logging does have a reforestation program.

It is in everyone's best interest, especially our Rain Forests that we stand by these programs and support them in full. That is why we only sell Brazilian Hardwood that has been responsibly harvested and abide by The Lacey Act and Ibama laws.

With everyone's support the sustainability of the Rain Forest will be enforced.

The World’s First Ban on Trade in Illegal Wood

What is the U.S. Lacey Act and why is it important?

On May 22, 2008, the U.S. Congress passed a groundbreaking law banning commerce in illegally sourced plants and their products— including timber and wood products. The new law is an amendment to a 100-year-old statute, named the Lacey Act after the Congressman who first championed it. While the Lacey Act has long been one of the most powerful tools for the U.S. agencies fighting wildlife crime, its potential to combat illegal logging remained untapped to date. Now the Lacey Act sets a groundbreaking precedent for the global trade in plants and plant products, acknowledging and supporting other countries’ efforts to govern their own natural resources and putting in place powerful incentives for companies trading in these commodities to do the same.

What does the U.S.’s new law do to address illegal logging?

How will the new Lacey Act provisions be implemented by the U.S. Government?

The U.S. Department of Agriculture’s Animal Plant Health Inspection Service (APHIS), which has traditional responsibility for plant imports, will play the primary role in processing declarations. APHIS will share responsibility for investigating illegal plant cases with the U.S. Department of the Interior’s Fish and Wildlife Service (FWS), which has a long history of expertise on Lacey Act trafficking cases. The Department of Homeland Security, which controls U.S. customs and monitors the borders through Customs and Border Protection, will support this work. If federal inspectors uncover or receive evidence of criminal activity, further investigation will occur. If there is sufficient evidence that the product is illegal, the shipment can be seized. At this point, the case may be referred to the Department of Justice and/or forfeiture proceedings may be initiated.

The Brazilian Institute of Environment and Renewable Natural Resources

The Brazilian Institute of Environment and Renewable Natural Resources - IBAMA, within the scope of its institutional mission of encouraging the correct techniques of intervention in nature, such as the management of the forests in the Brazil. It is designed to be used by the forest industry and society in general, to help divulge Brazilian woods in both domestic and international markets. This will encourage the commercialization of those species not well known in the market and allow forest management to be carried out with a greater number of species. This will increase the economic viability and, hopefully, greater the utilization of sustainable forest management.

Please click on the hyper-links above and they will take you to the sites that explain everything about The Lacey Act and Ibama.